GAP2 researcher Kai Wätjen is one of the leaders of a new European funded project calling on German fishermen of brown shrimp to delete “middlemen” in processing, and encourage consumers to peel the shrimp themselves. The project, “Sustain seafood”, is aiming to tackle sustainability and traceability issues of brown shrimp fished in the North Sea, off the German coast.

It’s not just the researchers that link the project to GAP2. Data collected as part of GAP2’s German case study will be used to investigate disease within the brown shrimp population, create a species inventory for the area, and provide an open-access database for local fishermen.

The project an its links to GAP2 were featured in an article in Seafood News on IntraFish which you can read here. 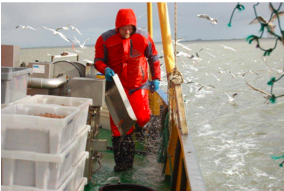