In February 2015, GAP2 held the second in a series of workshops on the future management of the Channel scallop fishery. A collaborative workshop was held in Normandy, France, with a view to pulling together concrete ‘next steps’ in building an environmentally and economically sustainable future for this key fishery for the UK and France.

The outcomes of this meeting have now been published in a detailed report. Read it here. A French version of this report will be published shortly. 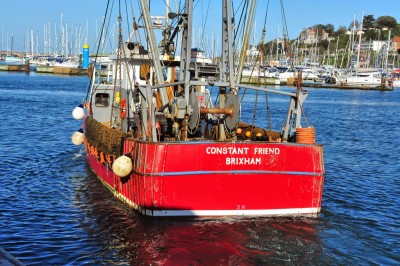 The GAP2 scallops work kicked off in Brixham, England in 2014.

A two-day workshop on the future management of the Channel scallop fishery was held in Port-en-Bessin, Normandy, France from 10-12 February 2015. The event was attended by a diverse group of approximately 55 participants, including industry (fishers and their representatives, quota managers, supply chain), government, academia, and environmental organisations.

The workshop’s purpose was to build on dialogue and outputs from the first GAP2 Channel scallop workshop held in Brixham, England in April 2014. Organisers sought to inspire motivate participants to engage in a process seeking commitment to a long-term management plan, thereby better ensuring the future health and success of the Channel scallop fishery.

Delegate discussion converged upon three themes: ‘leadership and governance‘, ‘science and data‘, and ‘management measures‘. The main outputs/actions from these themes were documented by the GAP2 team and are set out below:

The spirit of the workshop was open and constructive, and participants remained highly engaged in discussions throughout. The final repot and key outputs will be presented at a future NWWAC meeting, most likely at Edinburgh during July 2015.

Read the report in full, here.