As part of the GAP2 exchange program, scientist Pablo Pita Orduna travelled to Australia in 2013 to shadow ‘Barefoot Ecologist’ Dr Jeremy Prince. You can read his blog on his experiences here

This year, Dr Prince has come to Galicia on a return exchange, and taught a three-day workshop on his Barefoot Ecologist Toolbox, in which participants could use a new tool for self-monitoring of stocks. Dr Prince writes about his work and the event below.

A new technique to determine sustainability of stocks 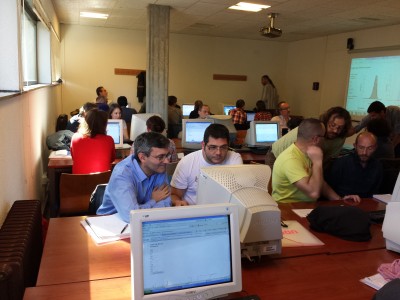 Those attending the workshop were able to put their own data into a new model designed by Jeremy Prince and Adrian Hordyk.

From 11th to the 13th March, Adrian Hordyk and I introduced our newly developed length-based ‘Spawning Potential Ratio’ (SPR) assessment technique to a workshop in A Coruña, Galicia.

The technique is designed to allow fishers to determine, through a simple method, whether targeted stocks are completing enough breeding to ensure long-term sustainability.

The proceedings started on the Tuesday with an introductory presentation attended by about 25 people in person and another 80+ internationally by web-cast, mostly in the UK but with some participants from as far away as Canada and Indonesia.

Almost 30 participants attended the two day workshop that followed; mainly Barefoot Technicians working with the Cofradías (cooperative local fishing organizations) and biologists from the Galician autonomous government, but also scientists from CEFAS in the UK, and Portugal. Most participants had brought their own data sets with them and used the workshop to develop initial SPR estimates for species of interest to them. 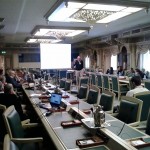 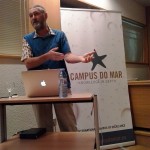 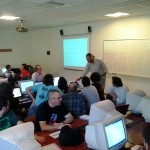 Our technique estimates rates of reproductive output (SPR) from local data on the size composition of the adult part of a stock along with local estimates of size of maturity. These data are evaluated in the light of each species’, or species group’s, characteristic life history ratios (M/k & Lm/Linfinity) which are derived from the literature of a species and taxonomically related species.

The first ‘hands-on’ outing for the method

Previously we have presented overviews of our Length Based SPR technique, and the results we have been deriving with it, but this was our first ‘hands-on’ outing for the technique. For the first time we planned for workshop participants to use the software developed by Adrian to analyze their own data sets. So it was with some nervousness we first laid out the theory underlying the technique, and then began showing participants how to apply the software to their own data. We could not have been happier with the results.

‘Do it yourself’ assessment

Despite the English / Spanish language barrier being an impediment for many of the participants, there was a tangible buzz of excitement when on the second day participants began using the software with their own data, and realizing just how simple and quick the analysis really is.

Most of the work we have done to date through the development of the technique has focused on teleost (bony fish) species, simply because the size and biological data we have needed for the development process have been most easily accessible for teleosts. So one of the highlights of the workshop for us was working with mainly molluscan and crustacean data-sets. The theoretical underpinning of our technique predicts it will work well with the invertebrate species and the experience of the workshop confirmed the theory.

At the end of the workshop a few of the attendees revealed that they had brought size data from fisheries for which they already had developed some form of assessment using a broader range of data inputs. We were all very happy to see that in each case the results they had produced in just a few minutes using our LB-SPR technique, reproduced almost exactly the various results they had derived by more complex means.

In parting comments workshop participants unanimously told us that they thought the LB-SPR approach could have great utility in Galicia both with the small-scale coastal molluscan fisheries, but also with a range of teleost and nephrops fisheries in their region.