On the 7th & 8th of February, 2013, the GAP2 project is running a two-day workshop in Chioggia (Venice), Italy to enhance GAP2 scientists’ knowledge in methods used in social science research. You can read about the workshop here

ISPRA researcher, Igor Celic, shares his thoughts on the first day of the social science workshop: 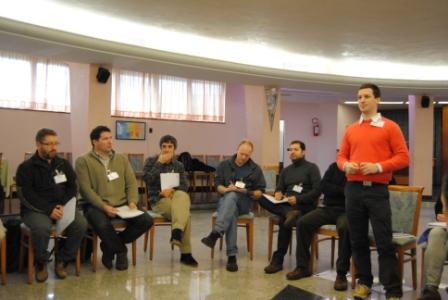 “On the first day of the GAP2 workshop about social sciences methods, as we began at 9am, I don’t think anybody knew what to expect from the day ahead of us, nor how tough it would be.

The majority of scientists were biologists, but there were some anthropologists and a few others that were less well defined. Without delay the workshop started and the social scientists attacked the biologist with their knowledge, like a tsunami!

The biologists didn’t have anywhere to run and they had to learn to swim in this weird social environment! They were forced to interview a complete stranger, revealing a professional or a personal secret. Little did they know that the other person would later present themselves to the others and reveal the secret to the group.

Then there was a video guide on how to best interview the fishermen. Watching the video, I guess that many of us were thinking about the mistakes we’d made in our previous interviews and they felt ashamed. The next step was to write down the knowledge we’d acquired from the video and this was evaluated by “examiners”. Then, unexpectedly, we were asked to conduct a real interview. Groups were set up containing an interviewer, interviewee, recorder and the observer. Many interviewers panicked about all the formal and ethical steps. The interviewee had a cold sweat about the tricky questions. The recorder was furiously trying to keep up with writing down an unstructured conversation. The observer had another coffee break. Later participants had to express their uncertainties and doubts (except for the observer who talked about the other three from a higher ground).

Finally came the worst part: participants were faced with their own case studies. We had to answer questions about what the aims of our case studies are, the parties that involved, the roles that each plays and the message we want to present to the public.

Despite the hunger that came from having to do this unexpected amount of intellectual work, we somehow managed to do this final task, present their poster and go to dinner!”

“And so came the second and final day of the GAP2 workshop. This time, everything started in a more relaxed way, which may have been due to the social dinner we had on Thursday evening. After some excellent fish based dishes and good wine, everyone came to their senses and started mingling. Lowering our guard, the biologists had an opportunity to express our impressions of the first day and it was obvious that the social scientists felt guilty about squeezing all that knowledge into the our brains in just a single day!

The second day started in a softer way. To let the biologists regain some of their confidence, the workshop organisers decided to give them a more fisheries orientated task: the search for the holy eco-label! After hearing that, everybody was more relaxed and felt capable of completing this task, we were divided into different search teams and so we went to the supermarkets, small fish shops and local fish market. After two hours of searching we came back with a huge desire to tell everyone what we’d found. Unfortunately, the organisers only wanted to know about the methods we’d used to gather the data and unable to express how they obtained their knowledge the biologists felt depressed again…

To regain our attention the organisers began an introduction to mapping while discussing the Italian case study. After a perfect technical explanation of the project, the social scientists had to regain the control of the situation. Acute and precise questions were asked about the social aspects and the implementations of the project, but this time the biologists counterattacked with decisive and detailed answers about their future actions. The social scientists thought about some extreme measures to regain the upper hand. A secret plot with an unexpected attack started to unfold, the so-called LEK/FEK plan. To be more effective they let us relax at the beginning and talk about fisheries ecology. Our confidence was raised again and we actually thought that during all those long years of study we might have managed to actually grasp some knowledge…

But we were hooked like a fish and the Donkey-Sheep sneak attack came to light: Biologists were asked to take a position along the Donkey (advisory council) – Sheep (Fishermen’s Ecological Knowledge, FEK, data) gradient based on their case study and to explain their position. We were divided more or less evenly along the gradient but this wide-open strategy was a failure. After being bombarded as to the reasons for our positions, we thought it’d be much wiser to regroup into a single compact group. However, this exposed our desire to use all our knowledge and give advice to the fishermen (to “rule” them). It was a total defeat for the biologists.

After cornering us, the social scientists had one last lesson to teach. We were so overwhelmed this time, we answered politely and positively about our impressions and thoughts on the workshop. Some last efforts were made to resist the SS staff, but it was totally useless. After a successful partial conversion of biologists into social science researchers we were sent home with a lot to think about the implementation of the social sciences into our case studies!

Although numerically inferior, there is no-doubt the social scientists won this tough war!”