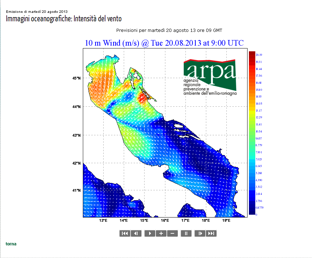 On 19th August, GAP2 scientists went to sea onboard the bottom trawler “Drago” (see video below). But on Tuesday and Wednesday, they were forced on land by bad weather (the so called “Bora” wind).

However, tomorrow and next Friday they will go back to sea with the bottom trawler “Perla Nera” to conclude the second GAP2 Adriatic trawl survey. The survey will cover an area extending over 59 nautical miles between the Po delta in the south and the Grado-Marano lagoon in the north.

Samples will be taken from 21 sites jointly decided upon by fishermen and scientists, between 4 and 18 nautical miles from the coast, an area that represents the Veneto Region Administrative marine waters. Total catch is measured, along with commercial species number, weight and length. Discard samples will be also taken to be used as a proxy to describe benthic assemblages. Information will be made available to fishers and fishery managers, and will facilitate the enforcement of spatially explicit management in the framework of an ecosystem approach in the Northern Adriatic Sea.

This second survey represents a fundamental step forward for the Italian case study. It is conducted at the end of the area’s summer trawling ban, allowing an evaluation of the status of marine resources immediately after the ban, and results will be presented to fishermen in a public meeting just a few days before they will start fishing again (2nd September). It is important to note that without the direct involvement of fishermen (providing both fishing vessels and valuable help for measuring and sorting the catch) this survey would not have been possible. This experience represents a milestone of the participation process that began with GAP2 in Chioggia.

Sampling will be performed annually to monitor and describe demersal fish and shellfish, together with fish habitats and biocenosis, spatial and temporal distribution in the area. This activity is integrated with further data collection made monthly by GAP2 scientists on board of Chioggia’s FFVV, as well as the collection of commercial data performed by GAP2 fishermen who record catch data haul by haul on electronic log-books installed on their boats in the framework of the project.

After being measured, the fish caught in the survey will be used for charity purposes by the GAP2 fishermen. Indeed, fishers belonging to the “Consorzio Armatori di Chioggia” are used to spend part of their holidays to cook fish for collecting money to support charity initiatives. This year the GAP2 trawl survey catches will be used to support the populations of Jolanda di Savoia, who two years ago experienced a terrible earthquake.