Having worked with GAP2 for the past three years, Martin Pastoors is moving on from the project, resigning his post as leader of Work Package 3 for a new role as the first Chief Science Officer at the Pelagic Freezer-trawler Association (PFA).

Taking his place will be his IMARES colleague Floor Quirijns. Here GAP2 interviews Martin and Floor for their views on the project’s progress, and to hear what’s in the pipeline for them both.

How long have you been working with the ‘GAP’ project, and how did you become involved? 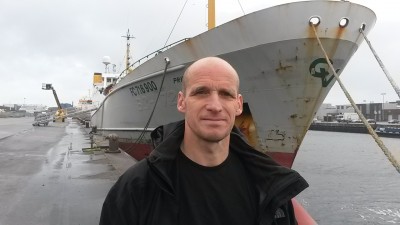 Martin Pastoors, GAP2’s WP3 leader. Now moving on for a new role at the PFA.

MARTIN: I have worked on the GAP2 project since the initial framing of the proposal. I had not been involved in the first GAP project, but Steve Mackinson approached me when he was starting on the second GAP project. I had just come back from my job at ICES where I had chaired the fisheries advice process. One of my key action points there was the communication between science, stakeholders and policy. So that is probably why Steve wanted me on board of the second GAP project.

FLOOR: I haven’t been heavily involved in GAP up to now. Through Marloes Kraan and Martin Pastoors, with whom I work together a lot, I did hear a lot about the project. The type of work that is done in GAP is not new to me: since I started working in IMARES in 2002, I have been focusing on (improving the) collaboration between fishers, administrators and scientists. This year, I had a closer look at what is done within GAP: when the Canadian fishers and scientists visited the Netherlands within the GAP exchange programme framework, I joined them for two days. That was a very nice experience: both getting to know the Canadian visitors and seeing the Dutch fisheries through their eyes.

How have you worked together on your work package? What is the purpose of WP3?

MARTIN: I think GAP1 already laid an important groundwork of collaboration between research and fishing industry. The case studies enabled effective cooperation in research. The challenge that was identified though, was that there was relatively little take up of the results of the cooperation in the traditional scientific channels, let alone in the policy making. A second gap as it where. And GAP2 was intended to bridge that second gap. WP3 deals explicitly with the link between the participatory research and the policy making level. The basic question is: how can we make the new knowledge count? In order to answer that question we need to understand the principles of the use of knowledge in policy-making. That is why there is a PhD student at Wageningen University (Kari Stange) who is specifically studying these aspects.

FLOOR: When Martin announced that he would be leaving IMARES, he asked me if I wanted to take over coordination of WP3. Since then, he explained the purpose of the work package and the connection with the other WPs. And he talked me through the things that have already been done and learned and what needed to be done in the next months. I guess I’m ready for it!

What is special about GAP2?

FLOOR: I think bringing fishers, administrators and scientists together is the way to go to improve fisheries management. Physically bringing them together, but especially bringing them together figuratively speaking. And to do that internationally, helps us doing it the best we can: I think we can and should learn from each other instead of reinventing the wheel in each separate country. So that is what I like about GAP2: this project does it all.

Martin, where is your next role and what will you be taking away with you from GAP2 that will be applicable in your new job?

I will become the first Chief Science Officer at the Pelagic Freezer-trawler Association (PFA). It is an exciting possibility to become a researcher for the industry. I have been arguing for a long time already that this development should get started. Professional fishing industries that are dependent on natural resources should know about those resources and should contribute to the knowledge base for management. In the past, I have been part of the process of opening up the scientific advice and explaining the basic assumptions and data to stakeholders. I remember that during my time as chair of the North Sea Demersal Working Group at ICES, I was invited by the North Sea Commission Fisheries Partnership for a thorough review of the stock assessments that we produced. This was probably in 2001 or 2002. I was really serious about it and ‘opened the box’ by showing everything we do. I also showed the things we did not know but made assumptions for. The interaction between the industry and researchers in that review process was very constructive. I learned a lot about the perspectives of the industry and about the knowledge they can bring to the table. Since then, I have been working on improving collaboration between research and industry. But always from a perspective of being employed by the research institute. That gives you certain freedom but it could also be a constraint sometimes.

In my new job I will be working with the industry to develop new protocols and strategies that capture the knowledge and activities of fishing vessels at sea. In my opinion, there is a lot to be gained by tapping in to the knowledge sources on board of the vessels. My role as researcher will be to make that knowledge available for scientific interrogation. I will also be translating back to them the outcome of the scientific processes. I am honoured and proud to be one of the first persons in this type of job.

MARTIN: Main challenge that I see at the moment is to keep the fishing industry onboard when the policy is looking for drastic changes but without very good explanations or means. I am really concerned that the new discard ban could do a lot of harm to the positive developments that we have seen over the last decade with the decline in fishing mortality, with the RACs as platforms of collaboration and with initiatives like the Scottish conservation credit scheme. The discard ban is a very complex piece of legislation that is very very difficult to explain. There have been many meetings already trying to figure out what the different elements mean. Taking the discard ban as a learning process, then it could develop in something positive. But if it would be rolled out as a control and enforcement approach, I am really concerned that it will do much more harm than good.

Overall the challenge that I see is to go from a very hierarchical top-down micromanagement style of fisheries management to a management style that is more comparable to other industries: where society gives out a license to produce but the industry needs to demonstrate that it complies with the license. Making the industry responsible to society instead of society telling the industry what to do. That is also why I have taken the strategic decision to be part of the industry and trying to work in that direction.

FLOOR: I agree with Martin on the challenges he describes concerning the discard ban. Another challenge for the fisheries is not to get overshadowed by all those parties who want a say in use and management of the seas: governments (EU and national), (e)NGOs, shipping industry, wind farm companies, oil & gas industry etc.

Floor, how do you feel about taking over as WP3 lead, and what will be your priorities for the final year of the project?

It is quite exciting to take over the WP3 lead. On the one hand, because I haven’t been involved so far and quickly need to learn about all that has been done and how we can finalise the WP in a meaningful way. And on the other hand, because I heard so many good things about the project and finally being part of it. My priority is mainly to bring what was set in motion to a good end. In June I will be at the GAP2 meeting in Rome: at that stage I expect to have a more detailed plan.

To find out more about WP3 and its work, contact Floor on: floor.quirijns@wur.nl