From November 2013 until March 2014, Maiken, a social anthropologist based in Norway, will be living and working in Spain. Working with fishermen and scientists involved in the Red Shrimp case study, Maiken will be studying how management plans are implemented from a “people perspective”. You can read all her blog posts here.

This case study now officially consists of film stars! GAP2 Comms Officer, Katrina, and a film crew from production company ‘Nice and Serious’, Matt and Duncan, came to Palamos last week and we had a great time! I was impressed with the crew, both in terms of how prepared they were but also how easy they made the interview situation. I am really looking forward to seeing the result. For those interested in short informational videos, you should have a look at their webpage: www.niceandserious.com. 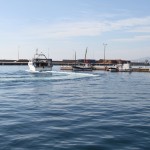 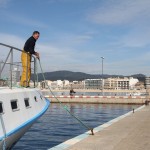 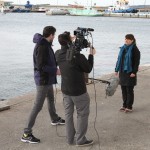 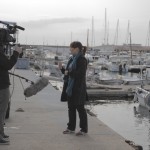 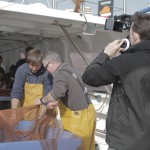 One of the best things happened during the film crews stay: we went out trawling! Our local fisher representative, Conrad, made a huge effort to make this happen. He made a short trip with us to the closest fishing ground, and then returned to sea with the PhD student Giulia to do the biological sampling (the last one for GAP2).  We were a bit anxious (read: sea sickness) since we had to cancel the day before because of the weather. Four metre waves are not tempting under any circumstances, and less for those filming. But, the weather Gods were all on our side and the Mediterranean Sea was like a glittering soft cushion in a beautiful sunrise – and there were dolphins too!

Sadly, this was our last fieldtrip to Palamos, but it was a great one! Now we are just waiting to see the result of the Nice and Serious team’s efforts!