Three days of trawling – from the 26th to the 28th of August 2014 – by ISPRA scientists has begun, in order to assess the fisheries resources’ status at the end of the annual fishing ban.

Watch a video of the 2013 trawl survey here.

Scientists from GAP2 partner organisation ISPRA (Italian National Institute for Environmental Protection and Research), based in Chioggia, in partnership with 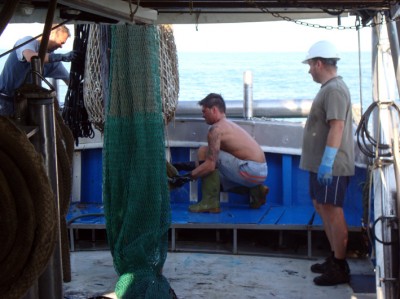 UNIMAR scientists, will conduct a 3 days scientific trawl survey (26th-28th August) to investigate the status of fisheries resources of the Veneto Region waters.

Sampling activities will be carried out on board of two otter-trawl fishing vessels, “Drago” and “Perla Nera” (Chioggia fleet), with the collaboration of GAP2 fishermen, in order to assess the status of fisheries resources at the end of the fishing ban. Survey results will be presented to professional fishermen and the public audience on Saturday 6th September at 9:30 at the Chioggia Municipality Town Hall.

This is the third survey carried out in this period since 2012 in the administrative waters of Veneto Region. Sampling activities will be conducted within the framework of the GAP2 project, that since 2011 has brought together the effort of ISPRA scientists and fishermen of the Chioggia fleet in a common process intended to describe the spatial and temporal distribution of Northern Adriatic stocks. The GAP2 Adriatic Sea case-study has the final goal of defining management proposals for the sustainable exploitation of Northern Adriatic stocks, according to a vision that is shared between scientists, fishermen and stakeholders.

This survey, authorized by the Italian Ministry of Agriculture Food and Forestry Policies, consists of fish fauna sampling at 21 sampling stations between 4 and 18 Nautical Miles from the Italian coast, along transects in a spatial area between the Po Delta and Grado-Marano lagoon; the spatial allocation of sampling sites was decided in an agreement between scientists and fishermen.

Samples of commercial species (common sole, mantis shrimp, red mullet, cuttlefish, whiting, etc.) and discard (non commercial species, such as sponges, sea urchins etc) will be analyzed, the latter in order to describe the seabed habitats and evaluate its relevance on the total catch, together with environmental parameters of marine waters.

In addition, during the survey, the amount and composition of seabed and floating marine litter will be assessed, in partnership with the IPA Adriatic DEFISHGEAR project  which sees ISPRA, Chioggia, involved in research activities in the Chioggia study area (www.defishgear.net) in collaboration with the GAP2 project.

It is particularly useful to carry out this survey at the end of the fishing ban, which every year imposes more than a one month hiatus in trawling activities in Italian waters, to allow  the reproduction and growth of juveniles of the most important commercial species. Indeed, there is a high expectation from fishermen that from the 8th September they will be allowed to return to their fishing activities. Whether or not this is the case will be based on the results of the survey, since it will provide some clues on the situation with regards to when the ban will be lifted.

Moreover the survey will help to understand the effects that this summer, to some degree “abnormal” in terms of weather conditions, could have on the stocks exploited in the area. Look out for more updates on the trawl survey over the coming days!