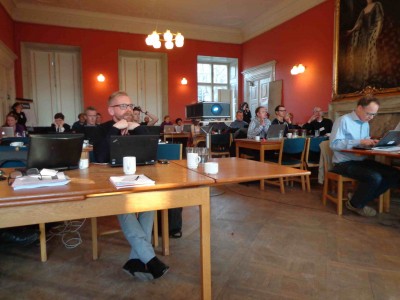 The project aims to integrate the MSY concept with the other principles of the CFP: the precautionary and the ecosystem approach.

how to develop long term management plans that take into account both mixed fisheries and species interactions while also achieving compatibility with environmental and social constraints?

Around 50 participants discussed the progress during the first year of the project and planned for the activities in the year to come.

Although the title of the project suggest a very different focus from the GAP2 project, during the meeting it became more and more clear that there are in fact quite a number of similarities in the ambitions between MYFISH and GAP2.

The key similarity is that both project aim to work with stakeholders and policy-makers to develop integrated, multi-species fisheries management plans that also take into account the environmental, economic and social constraints that are embedded within the different European and national policies. For example, we spent half a day on targetted discussions about stakeholder engagement in the project and project engagement with stakeholders (note that the two are not the same).

Ultimately, a major challenge in many of the FP7 funded research projects dealing with fisheries management, is to achieve a meaningful operational application of the results from the project to the practice of decision-making. Many natural (fisheries) scientists are quite familiar with the direct links between science and policy (e.g. the European Commission).

But many also think that it is a bit of an uncomfortable position to also be in association with the ‘real stakeholders’ (fishers, eNGOs, RACs). So these FP7 projects could be seen as a testing ground for this multi-level interaction processes.

For me personally, the MYFISH project seems to develop in a very similar mode as the GAP2 project. In both projects I am the work package leader for WP3. In GAP2 this is called ‘making a difference’ while in MYFISH it is called ‘implement’. But in both cases it is about linking the scientific work to the actual practice of decision-making, mostly through the development of long term management plans. 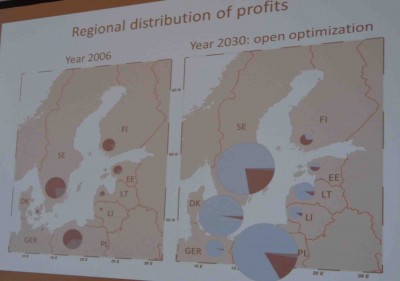 One year into a four year research project means that there are only very preliminary results that can be presented. But still a very fascinating result was presented by Rudi Voss, an economist working on the Baltic case study in MYFISH. Using a bio-economic optimization model for the three main species in the Baltic Sea (cod, herring, sprat), he showed how an unconstrained optimization process ended up with a substantially higher cod stock, a somewhat higher herring stock and a much lower sprat stock. This would generate the highest economic revenues overall.

However, he also showed how this results would have very different implications for the different countries fishing in the Baltic Sea, with countries traditionally fishing for pelagic stocks being much less well off, that the countries fishing for cod. These types of results can be important elements of management trade-offs that can be made for this area. I would expect that similar types of trade-offs could arise in other regional seas.

Three top items came back over and over again in the discussions during this second annual meeting:

1) the precise definition of MSY variants that had been set during the first annual meeting in Vigo, 2012.
2) the role of stakeholder engagement in the project (when to engage with whom) and
3) the use of decision-support table to facilitate dialogue between researchers, stakeholders and fisheries managers (what needs to be a decision-support table to effectively support decisions).

We still have a lot of work in front of us. But I do feel that this second annual meeting has paved the way for an effective stakeholder engagement strategy that will make it possible to directly link the results of the project to actual decision-making processes that are taking place in the regions where we carry out our case studies.