We read in the newspaper that a delegation of 13 Italians including 6 fishermen, 4 scientists, 3 stakeholders (see pictures) got lost and by chance landed in the Netherlands, claiming that someone here is waiting for them to talk about Dutch fisheries.

So, BE AWARE, they look harmless but in reality they are potentially very dangerous!

Below, some good tips from Wikifishpedia about why you should never accept a delegation of Italian fishermen in your country:

…you will have an exceptional and unforgettable exchange in the Netherlands, whether you are part of an Italian delegation or one of the hosts!

Spotted: The Italian delegation lazily strolling around in the Netherlands! 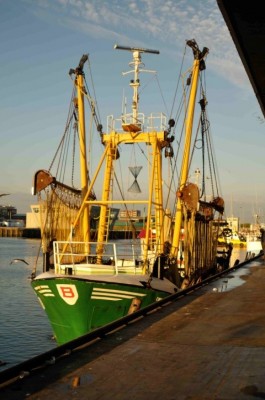 A pulse trawler, ready to go…

Thanks to the warnings we supplied on the potential dangerous nature of the Italian group, we received informal reports from Twitter and Facebook by Dutch citizens, reporting that the delegation was spotted, indeed, on the coast of the Netherlands.

It seems they were able to get in touch with Dutch people. It is too early to assess whether these contacts determined serious injuries in the local populations, since information is still controversial and scattered.

According to a local fishmonger from the Scheveningen Fish Market (who requested that we withhold his name from this report), the group was seen in the early morning, nearby the Fish Auction getting on board of the pulse trawler TH-10 talking to the fishermen Johan Baij. Claiming they had a meeting in Stellendam, they asked for a lift from this guy, who was unaware of their real aims. A seagull who was sailing between the two ports, called us saying that he saw these people on board the fishing vessel and that THEY WERE TALKING AND TALKING AND ASKING QUESTIONS about the pulse trawler and its use for shrimp and flatfish fisheries.

According to the seagull, the Italians appear to be very interested on the gear and they took many pictures. They also collected lots of information on the pulse trawl use, fishermen habits, fisheries problems and possible solutions in the Dutch fisheries. Very strangely, the seagull said, “they kept drinking coffee through the whole trip”.

Another informal report from the Stellendam harbour, where TH-10 was directed, confirm that the group was spotted in that area around midday. Needless to say, they were recognized by the typical loudness and tendency to ask questions. We called the UFA director at Stellendam harbour to have a confirmation of the sighting, and he said the group reached that area and started visiting the facilities and the shops of the local Cooperative. Unfortunately, since the mobile connection was not working properly, we caught only few words, the meaning of which is still being debated in our communication group. For the sake of responsible communication we report the full contents of the call with the UFA director :”…Yes, we spotted them (noise)…. Questions (noise) coffee many coffee (very high noise) fishing gear factory (High noise) trying to implement pulse trawl experiments in Italy (many voices together on the background) questions (very hard noise) local stakehold…”. The references to “many questions” and “coffee” points to the fact that the group was the Italian delegation.

“Now I know what silence sounds like…” UFA director said after the group boarded a specially-hired sound-proof bus, heading towards Den Haag. Indeed. a sacrificial victim, was the price paid for silence: a Dutch social scientist (irresistible bait to “stakeholders”) was tied to a seat to lure the Italians into taking their places on the bus.

(“It didn’t hurt…”, reveals the social scientist, now seeking the relative peace and quiet of the Antarctic, surrounded by screaming penguins, “… on the contrary, it showed me the true meaning of life!”).

After the Italians returned to Den Haag, their tracks were lost. Using reverse psychology we sent some observers to non-Italian restaurants, but probably the delegation applied reverse-reverse psychology and went for a pizza or pasta.

And then the very last night came.

“The shire!” “Baggins!” If you’re a fan of the Lord of the Rings you may remember the scene but, most of all, you may recall the voice of Smeagol while being tortured by the evil troops of Lord Sauron. 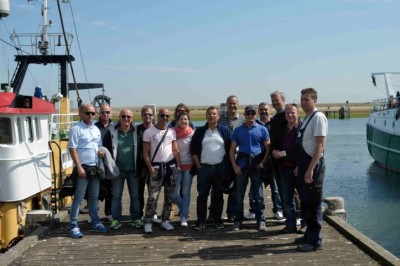 If so, you may also figure out how these two words “Cappuccino!” “Brioches!” echoed in the deserted hall of the hotel of the Italian delegation at 06:30 a.m. (this info have been confirmed by an anonymous maitre’d with a call to our network in the very early morning).

It seems that Starbucks at the Central Station was assaulted and robbed ten minutes later by 13 Italians dressed up as smoked herrings… One of the waiters at Starbucks, still shocked by the weird experience, depicted this horrible scene: “while ten of them diverted my attention by posing as in the Garden of Earthly Delights, three small herrings – I would say juveniles – sneaked at my back and grabbed as much their fins could bear… When I realized that the ten little herrings were indeed big Mediterranean anchovies it was too late!”.

Well, thank God it is over now… The costume officer in Schipol confirmed that the group left the country around midday. Quiet and peace reigns again on the lowlands of the Netherlands but… did you say that someone is thinking about a new forthcoming exchange to the Netherlands? BE AWARE, OTHER DELEGATIONS COULD BE EVEN WORSE THAN ITALIANS! So please, if you know anything about this, please call the Police and the Dutch Home Office Ministry to take the necessary preventive actions (Schengen? What is Schengen?). But be sure, our broadcast network will continue to assist Dutch citizens if such worrying cases will happen again.