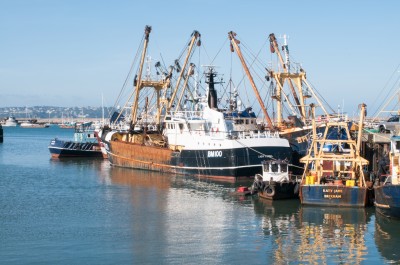 A view of Brixham harbour

Before arriving at Brixham we had three goals: 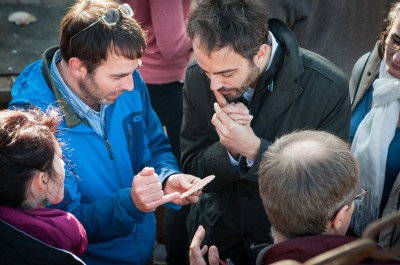 Ascertaining the age of a scallop

I think the second goal was the most important. The knowledge and expertise of our neutral facilitator, Edward Kellow, played a big part in creating the right conditions for a free exchange of perspectives between the various parties. This created an environment that made it easier for a sense of trust to develop which allowed participants to speak freely – resulting in a great deal of common ground being covered and agreed. Before the event I had some concerns that the atmosphere might get too heated – not forgetting the scenes from the scallop war stories from 2011 – but my fears we’re quickly allayed. Overall the group got on very well and the dialogue was generally very positive, constructive and forward thinking.  The ‘whispering’ translation worked particularly well and from the English side it did not affect the flow of the event at all, something which was important to ensure, given the need for a free-flowing exchange of opinions throughout the two-day event.

I was really impressed with all of the speakers: each had something to add which could be applied to the Channel fishery which showed a high degree of knowledge and expertise. The challenge now is to see if the management approaches can be scaled and implemented in a multi-jurisdictional fishery. I believe that it can be realised, although it will take a significant amount of effort and some compromise from all parties. However, I truly believe that the opportunities are enormous: managed differently, the benefits of this fishery could be even greater than they are now. We saw what sustainable and profitable scallop fisheries look like elsewhere and the Channel fishery is much larger than those examples – I believe now is the time to implement the changes necessary to ensure the long-term future of this stock, and the livelihoods which depend upon it.

When thinking about the shape of the event initially I was very keen to expose EDF’s design principles to a fishery. I was intrigued to see the reaction to Andrea Gesieke’s presentation. In the breaks I asked several authoritative people for their views and they were very positive, although some did highlight the potential pitfalls of some rights-based approaches – such as ITQs which it’s not necessarily what a design process leads to. The key aspect is design in relation to the goals and objectives unique to the fishery. I hope that there’s follow up on this because I feel that’s it’s key to a successful future for this fishery – EDF have shown with their work in other fisheries around the world that design is paramount to successful implementation of the methodology, leading to sustainable and profitable outcomes.

A key conclusion of the workshop was the need to improve the knowledge base that supports the management. A common theme from all the fisheries showcased in the presentations was that they all use science to inform their management. Similarly, the use of spatial management appeared to have significant benefits – again when such areas are underpinned by evidence. The system used in the Bay de Seine could be scaled up to include other member states – surely a pilot could be developed?

I was surprised by the spontaneous hands up vote to see who would support the fishery to seek MSC certification – my approximate estimate was that around two thirds of the group were in favour. Amongst the industry it seemed that the cost was the major obstacle. However to be in a position to reach the standard is something I believe was that all of those in the room were in agreement of.

Before the meeting closed the French delegation agreed to host a reciprocal meeting at some point in the future – this is something the organising team are keen to assist with. To ensure it becomes a reality it’s important that we build on the momentum that this Brixham-based event has created. Overall the organising team were very positive about how the event went – especially considering how little time we had to pull everything together.

Personally I am proud and thankful for everyone who helped organise and contributed to this pioneering event and for the Gap 2 project – without it’s funding the event would not have happened.