36 months on: Progress update from the Galician case study

Read on for an update on how the Galician case study has been progressing over the last twelve months.

We have now concluded the Ecosystem Mapping Phase of our case of study. We have obtained a highly detailed digital cartography on the distribution of 41 species of fish and shellfish in our study area of the Ría de Arousa (NW Spain), based on the collection, categorization and integration of the Traditional Ecological Knowledge (TEK) of the fishermen of the area. (Fig 1). 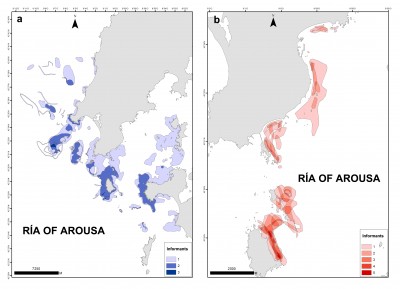 Fig. 1: Example of the distribution of European conger Conger conger (a) and yellow carpet shell Venerupis rhomboides (b)

Also, we have already obtained our first results of the Fisheries Monitoring Phase. We analysed data of two of the metier operating in the area (octopus and sea urchin) and we obtained final results on the spatial distribution of fishing intensity and CPUE of both fisheries.

The scientific results of our case study (CS) are being used by our partners. Thus, the sea urchin divers of Aguiño hope to improve the management of their fishery by an annual plan, partially based on the results of the CS, that has been recently submitted to the Department of Fisheries.

Furthermore, we have been invited to meetings between fishers, managers and policy makers of the Department of Fisheries of the Autonomous Government of Galicia (in charge of the management of the coastal resources) to find new ways for the management of one of the most traditional and economically relevant fisheries in Galicia: the octopus trap fishery. In the meetings we provided TEK-based maps with the distribution of the octopus and also the distribution of CPUE, obtained in the Fisheries Monitoring Phase. (Fig. 2). 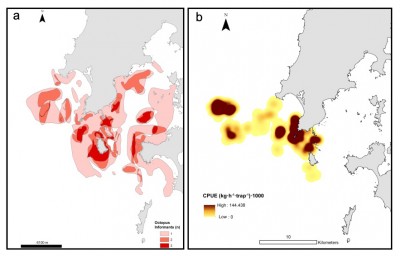 Fig. 2: Distribution of octopus Octopus vulgaris in the study area of the Ría of Arousa (NW Spain), based in the TEK of the fishers (a). Spatial allocation of CPUE of the octopus fishery (b).

Dr Pablo Pita took part in a 1-month exchange period with Dr Jeremy Prince of Murdoch University in Australia. During his stay, Dr Pita learned about a new stock assessment tool, specially suitable for data poor S-fisheries, that is being developed by Dr Prince and Mr Adrian Hordyk.

The GAP2 consortium agreed to make the Australian exchange a 2-way experience. Therefore, Dr Prince and Mr Hordyk were invited to perform a workshop hosted at the Second Symposium on Fishery-Dependent Information in Rome (Italy 3-6 March, 2014).

Also, we have organized a conference entitled “Technical Conference of GAP2 project on new fisheries management tools: building bridges between government, fishermen and scientists” that took place in the University of A Coruña between 11-13 March, 2014. The conference begun with a lecture of Dr Prince (available at http://tv.campusdomar.es/en/video/2879.html) and a 2-day workshop on the use of their assessment tool, carried out by Dr Prince and Mr Hordyk.