During the first 18 months, the case study has held:

Reports and minutes from the workshop and meetings are available.

A significant result from our case study so far is the common ground reached by stakeholders in deciding what comprises a Long Term Management Plan (from Workshop 1, November 2011).

However, the more political aspects management have also been identified as being critical to the successful implementation and compliance with any LTMP, for example, the division of the catch opportunities between SD 22-24 and Div. IIIa .

Through many fruitful and constructive discussions, stakeholders and scientists within this case study have agreed on the pros, cons of three options for LTMP development. 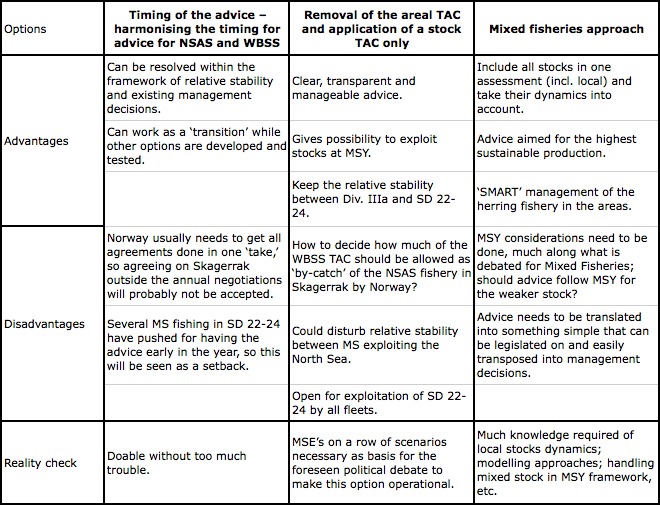 Matrix of LTMP options – agreed upon by case study stakeholders

*It was agreed that in order to evaluate the consequences of the two latter options it would be necessary to look at a series of simulated scenarios applying settings mirroring the set-up in option 2. Moreover, this should be given higher priority than option 3, which although considered the most scientifically supported way to handle stock mixing, requires a lot of work before it can be operational.

This entry was posted in Case Study 4 - Herring Management, Progress. Bookmark the permalink.